The Code of Conduct rules
‘The use of the “Code of Conduct” to lay complaints is a never ending farce that can destroy Local Government. I have had cause and opportunity to lay complaints against three other elected members and two members of staff on different matters that breached the code. I chose not to do so….  I also asked you not to waste time on the “he said or did this…. Etc.…. We have more important work to do to focus on the building a better Unley for the people who have entrusted this to us. We should not decend into a never ending round of legalese and politicking that gives our owners and ratepayers nothing! ‘
Hopefully the rules will be rewritten as the Premier has announced he was planning to repeal the code.

Dear Friends and Co-owners of Unley,
On a happier note you will find my newsletter attached indicating in Unley we are getting on with building a better future for Unley. I am often asked what is happening at our neighbouring Burnside Council, “Lots of lawyers…. Great expense and little benefit to ratepayers…
In Unley we could travel the same road.  Cr Hudson was found to have breached the code of conduct after a tied vote of 5-5 with the Mayor then supporting the admin’s recommendation that supported holding the discussions in secret. With Crs Hughes, Koumi, Schnell and Salaman I voted to only receive the report as I have no confidence in our Code of Conduct and means by which members are found to be guilty. A Councillor said it all when pronouncing in the public part of the meeting that it was important that the discussions were “in confidence” (secret) because it enabled ‘us’ to say things we could not say in public! Cr Hudson had no representation in the secret meeting.
I wrote to all elected members and senior staff,
Dear Colleagues,
I was not allowed to move my notice of motion to receive the report and take no action, or speak to it before we became secret. My attachments are not confidential as I stand behind them publicly. I was able to read out the summary after we had the secret debate.
The use of Code of Conduct complaints is a never ending farce …………..
The reasons are
1              The code of conduct rules are flawed
2              They operate in secrecy denying justice
3              To ensure elected members are able to carry out their duties without being frightened into inaction by heavy legal handedness.
4              To enable future Councillors have some confidence that they can             nominate, be elected and not be exposed to false reputational damage         without the opportunity to explain or defend.
5.           The charge against Cr Hudson is one of behavior at an Adelaide Council meeting. He was not acting as the City of Unley Councillor representing Unley. Some Adelaide Councillors would be very unhappy with what Cr Hudson said about a memorial and about the actions of the Adelaide Council. If it was about his representing Unley falsely it would be our business, but it was not. If Mike Hudson had committed an offence it should be judged by a proper public court where he is able to provide a defense and test the validity of the claims.
Please email me if you would like a copy of my full email giving details and explanations….. Let’s get on with improving life in Unley….. mhewitson@unley.sa.gov.au 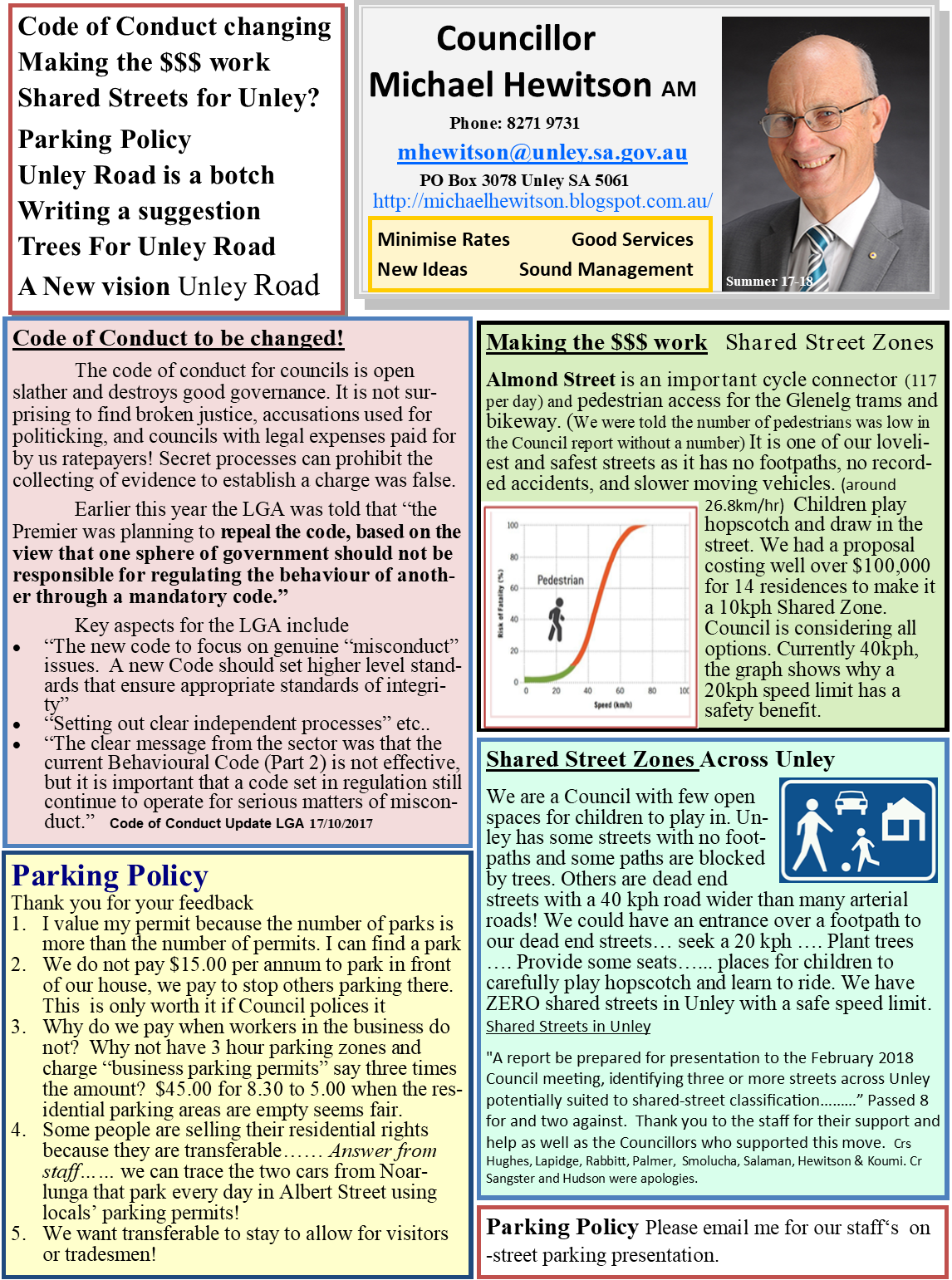 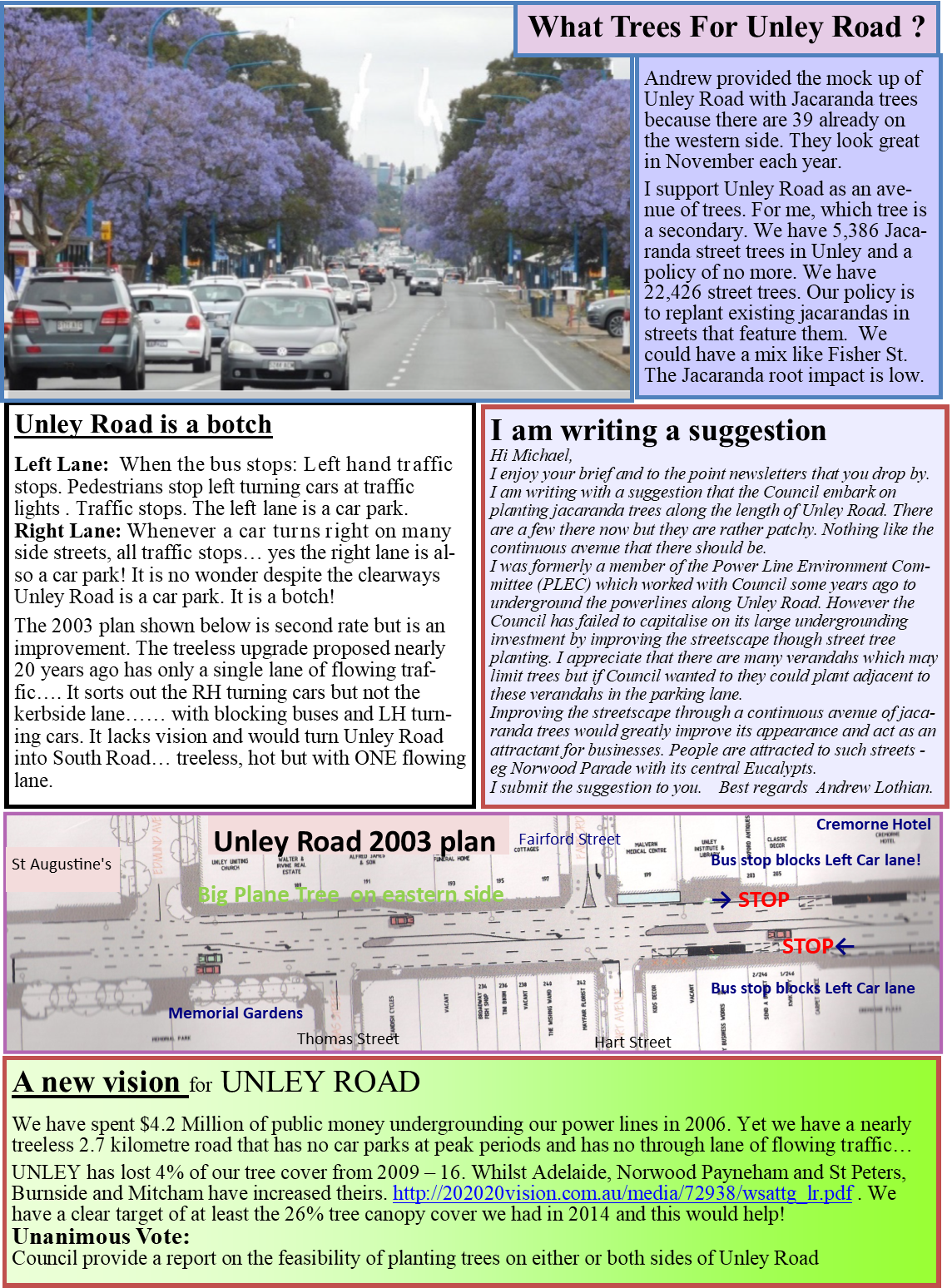 Posted by Michael Hewitson at 13:50